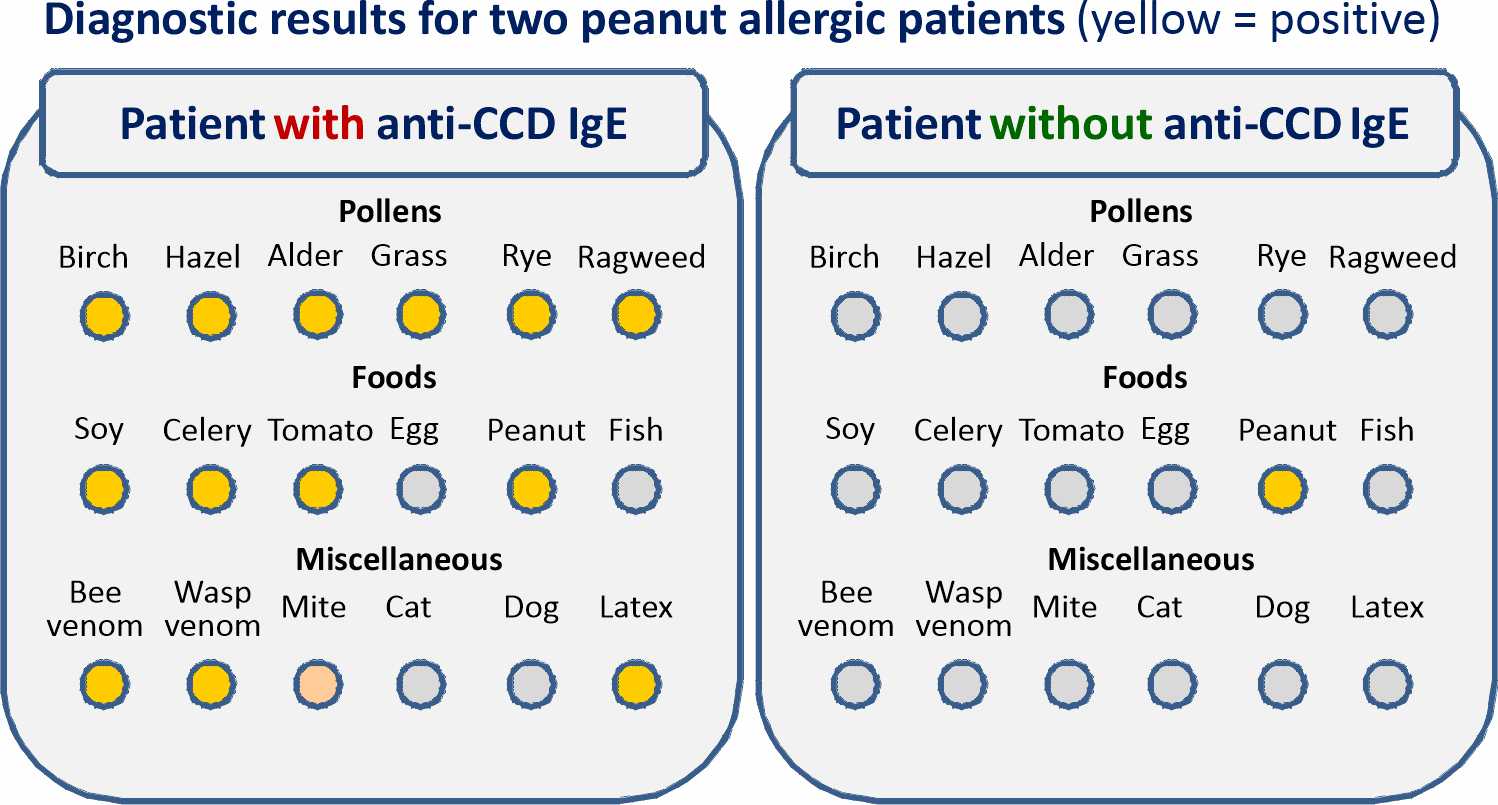 In a nut shell:
Plant and insect allergens contain glycoproteins with cross-reactive carbonhydrate determinats (CCDs). These occur in virtually all allergens from plants and insects, but do not elicit clinical symtoms. Hence, for patients having IgE against CCDs, serum-based allergy diagnosis is prone to deliver false-positive results.

The principle of serum-based allergy diagnosis is that presence of a ponderable amount of IgE specific for an allergen indicates an allergic status towards this allergen. This marvelously simple view, however, has been object to numerous refinements, modifications and additions over the last decades. It turned out that all too often, a positive laboratory result contradicted a patient´s experience of tolerating this particular allergen. Explanations of this phenomenon essentially pivot around two ideas, weak binding on the one versus tolerance on the other hand as it seems to be case with CCDs.

a) Weak binding: The passion of IgE for an allergen molecule can differ (in scientific terms: the binding affinity)

An obvious reason for this can be the phenomenon that closely related species harbor proteins that differ only slightly and therefore they are bound by the same antibodies – albeit to a varying degree of “enthusiasm” (called affinity by scientists). The similar “looking” protein from, for example, apple may be bound by IgE originally raised against a birch pollen protein. Typically, this type of cross-reactivity is characterized by a weaker reaction towards the related as compared to the true allergen. In case of apples (celery, peaches ….) the related allergen will rather cause moderate discomfort, the so-called oral allergy syndrome. For many patients this liaison between the anti-birch IgE and the apple, celery and other allergens will be lukewarm enough as to save the person from any symptoms. However, the binding will nevertheless be strong enough to bring about a positive outcome of an sIgE test. This type of misleading false-positive result is usually confined to small groups of phylogenetically related allergens and the physician evaluating the results will often be able to resolve this situation.

Weak versus strong binding
of antigen by antibody

b) Tolerance: IgE against a certain target is a priori clinically irrelevant

Antigens responsible for this phenomenon have been termed “Mimickers of allergy”.  Such clinically irrelevant IgE-targets may be certain proteins with restricted occurrence. Clearer, but also way more complex results are provided by component resolved diagnosis, where a range of individual proteins of an allergen are tested separately with array systems (buzzwords: ISAC, Alex).

The overwhelmingly important example for a clinically irrelevant molecule, however, is a group of carbohydrate structures known as “cross-reactive carbohydrate determinants”, abbreviated CCDs (reference 1, reference 2).

Proteins can be divided into two large groups: The ones only consisting of amino acids and the other bearing in addition a kind of decoration consisting of unusual sugars. These complex structures have little resemblance to the sugar you put in your coffee – or that you may refuse to put in your coffee for the sake of your shape and health. Moreover, these decorations come in different “flavors” depending on the origin of the protein. Mammals and thus (I hope you don´t mind) us humans produce these so-called N-glycans in a way that differs from that practiced by plants and insects.

In more scientific terms, the type of fucose-linkage to the sugar residue linked to the protein differs (see figure below). There are other subtle differences, but the occurrence of “core alfa-1,3-linked fucose” on proteins from plants as well insects is the one big difference (red arrows in figure below, Reference 3). This differing fucose position gives the entire sugar molecule an appearance that calls our immune system into action. More precisely, about a quarter of all allergic persons has sizeable levels IgE directed against such glycans, in other words against CCDs.

Modes of glycosylation of proteins

The xylose residue, which does not occur in our own glycoproteins may - in very rare cases - also contribute. Terminal substitutions such as in MGnXF3 probably play an inferior role. Noteworthy, presence or absence of the 3-linked mannose has at best a marginal influence on binding affinity. Thus, reagents for detection or blocking of anti-CCD-IgE may either contain MMXF or MUXF structures. The recent Proglycan CCD-blocker contains essentially MUXF3. Thousands of applications show its efficacy. It cannot be excluded that for some allergens, other structures may be even more effective. Elucidation of this issue is a major research goal of the Proglycan team.

A totally different type of cross-reactive carbohydrate structures is the alfa1,3-galactose that is found on proteins of almost all mammals except higher apes and man. This determinant, known as Gal-alfa-Gal epitope can lead to adverse reactions towards red meat and milk and milk products. There are hints that sensibilization often involves tick bites.

Why do CCDs not elicit allergic symptoms?

For some researches, carbohydrates are intuitively less relevant and less capable of specific and firm binding to antibodies. One source for this believe – apart from ignorance – is the indeed only moderately strong binding of lectins to their carbohydrate binding partners. The long-known role of blood-group determinants (the ABO system) and of bacterial surface polysaccharides as highly specific, firmly binding antigen, however, reminded that this is not a general situation. Therefore, the effort was undertaken to purify CCD-specific IgE from patients´ blood and determine its binding affinity to the classical CCD structure MMXF3. Briefly before that, the binding specificities of IgE and IgG for the most relevant protein allergens from grass and birch pollen had been determined by the same laboratory. This allowed a direct comparison of affinities. Interestingly for all allergens, the IgEs had very high affinities in the nanomolar to subnanomolar range  (Reference 4, Reference 5).

The binding strength of the IgGs, however, differed. In other words: IgG  vs. glycan determinants (CCDs) has a comparably much higher affinity than is observed with protein allergens. Now, the amount of IgG is much higher than that of IgE. We speculate that low ratios of affinity as observed for MMF and MMXF may just suffice to effectively compete for binding to theses determinantes. Hence, mast cell degranulation remains below the threshold of perceptibility. An additional (or dominating) mechanism could arise from regulatory T-cells, but no results in this direction have as yet been published.

Binding affinities of IgE and IgG to glycan vs. protein epitopes 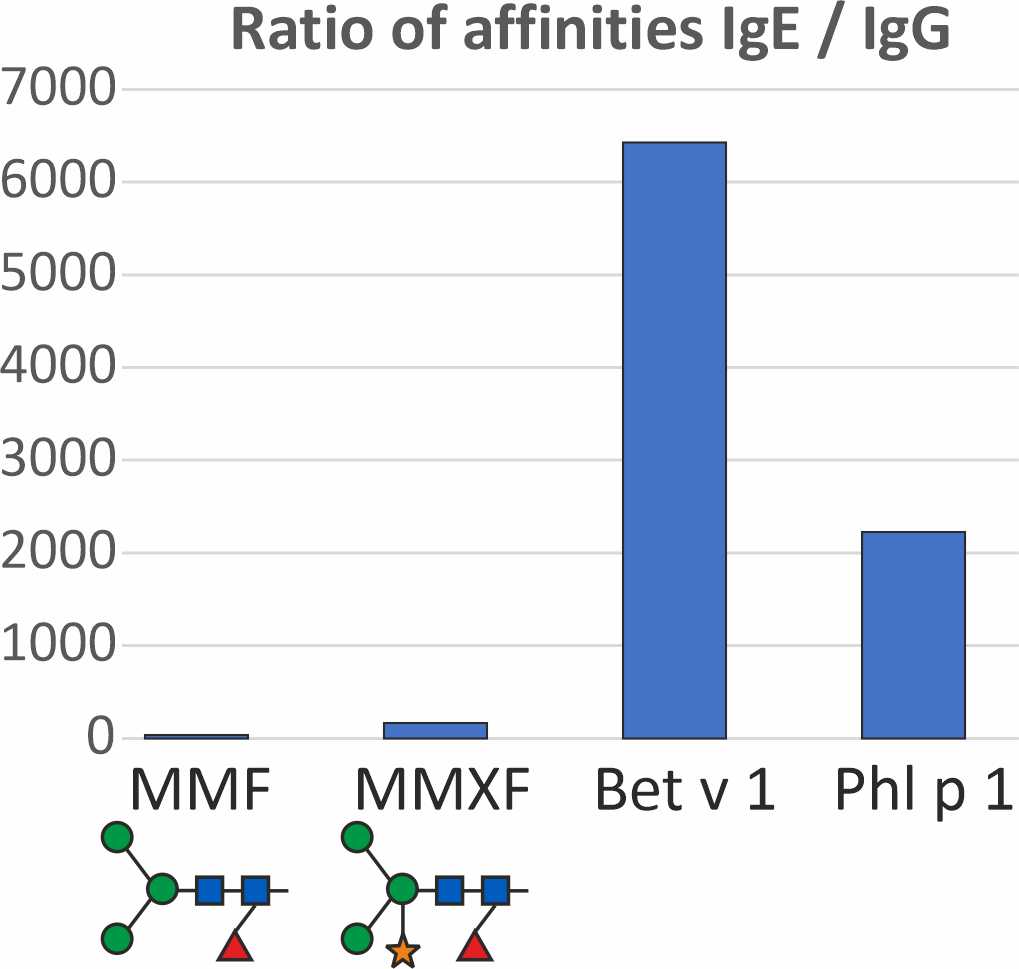 What could be the cause of this fortunate discrepancy?

We speculate that it is the inevitable daily contact with plant-derived food that necessarily acts as "specific immunotherapy" - a strategy that has proven highly useful for desensitization against real allergens. This can be realized by injections ("shots") of the respective allergen or by sublingual immunotherapy - a process somehow related to chewing food. 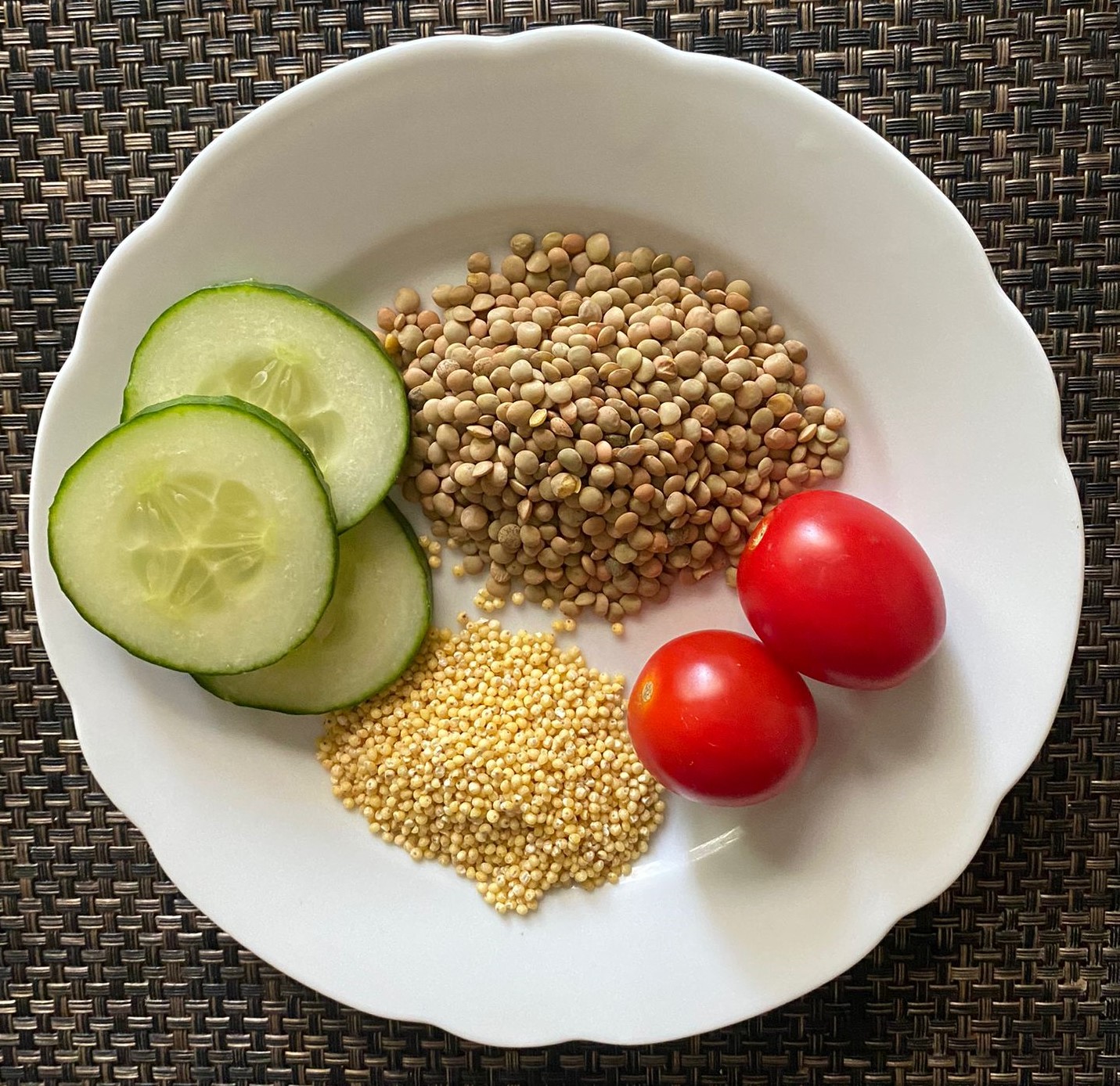