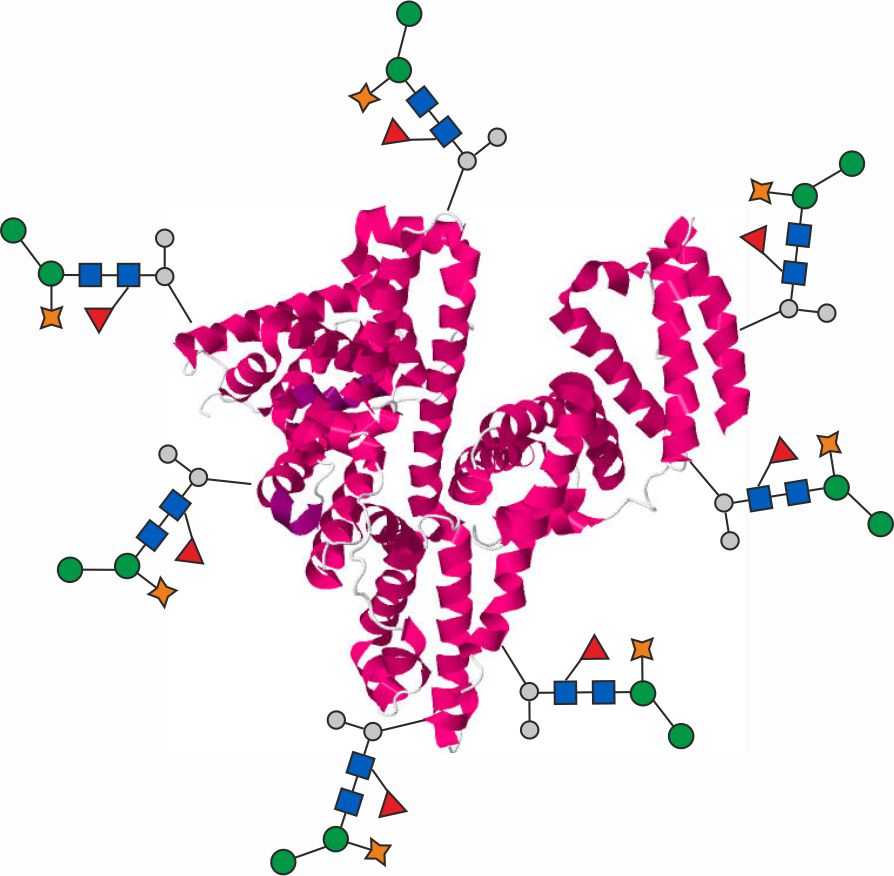 In a nutshell
CCD-based reactions can be blocked by adding the CCD in soluble form. The polyvalent, semi-synthetic proglycan CCD-blocker combines highest specificity and efficacy. Relevant results on the allergy diagnosis strip or array remain unchanged, false-positive results disappear.

Representation of the molecular structure of the proglycan CCD-blocker. The red coils represent the carrier protein albumin, the protruding objects are the glycopeptides carrying the CCDs.

The operational principle of the CCD-blocker is competition between CCDs on the allergen, which is bound to a surface, and an excess of CCDs in solution. Briefly before the serum sample is confronted with the allergen, a soluble CCD-carrier is added to the serum. Antibodies directed against CCDs will bind to these freely floating CCDs and are thereby prevented from binding to CCDs on the allergen. After the serum-allergen incubation, the serum together with the still soluble complexes of anti-CCD IgE and CCD-blocker are discarded. Thereby the vast majority of anti-CCD IgE is removed. 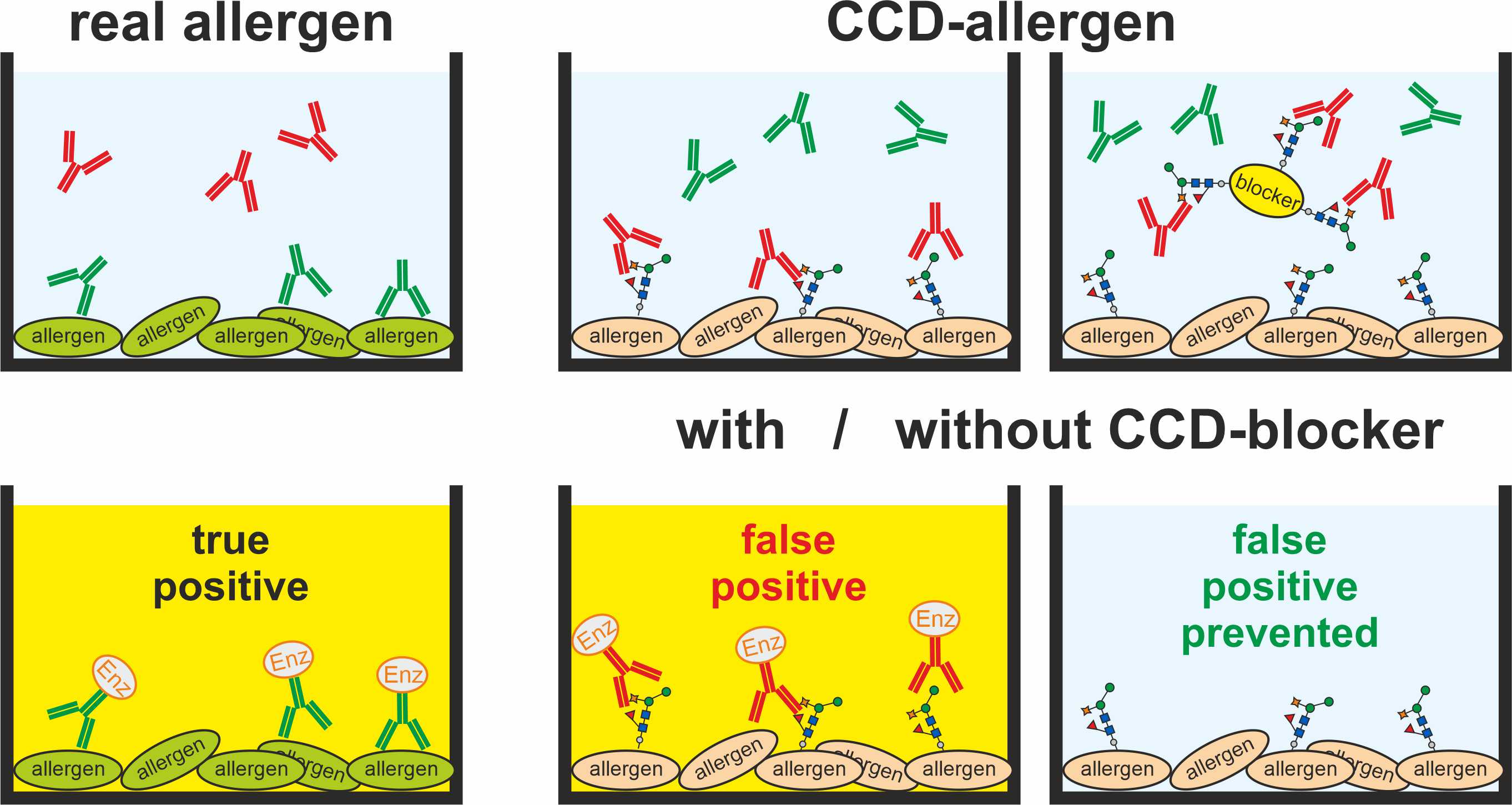 The boxes represent a test for allergen specific IgE. The upper line shows the situation when patient´s serum is incubated with the allergen, which has previously been adsorbed to the surface of the test vessel. Solvent volume may be 0.05 to 0.5 milliliter depending on the test system. After a while, all unbound compounds are discarded and a enzyme is attached specifically to patient´s IgE bound to allergen. Finally, substrate for this enzyme is added. In the presence of bound IgE, color will develop - the test is positive. If, however, the reaction is based on CCDs, the result is false-positive. This can be prevented by adding a soluble CCD-blocker to the serum.

The effect of blocking anti-CCD IgE is exemplified by strip tests of a person complaining about rhinitis at home and moderate hay fever symptoms. This person was confronted with a result where it seemingly was sensitized to virtually anything that came from plants and even insects as the cockroach line was faintly positive.  Being – mentally – sensitized, the physician Dr. Friedrich Holzweber had used custom-made strips with CCD control lines. Therefore, CCDs were suspected as the reason for this broad cross-reactivity. Indeed, application of the CCD-blocker totally abolished staining of most of the lines (reference 1, reference 2). 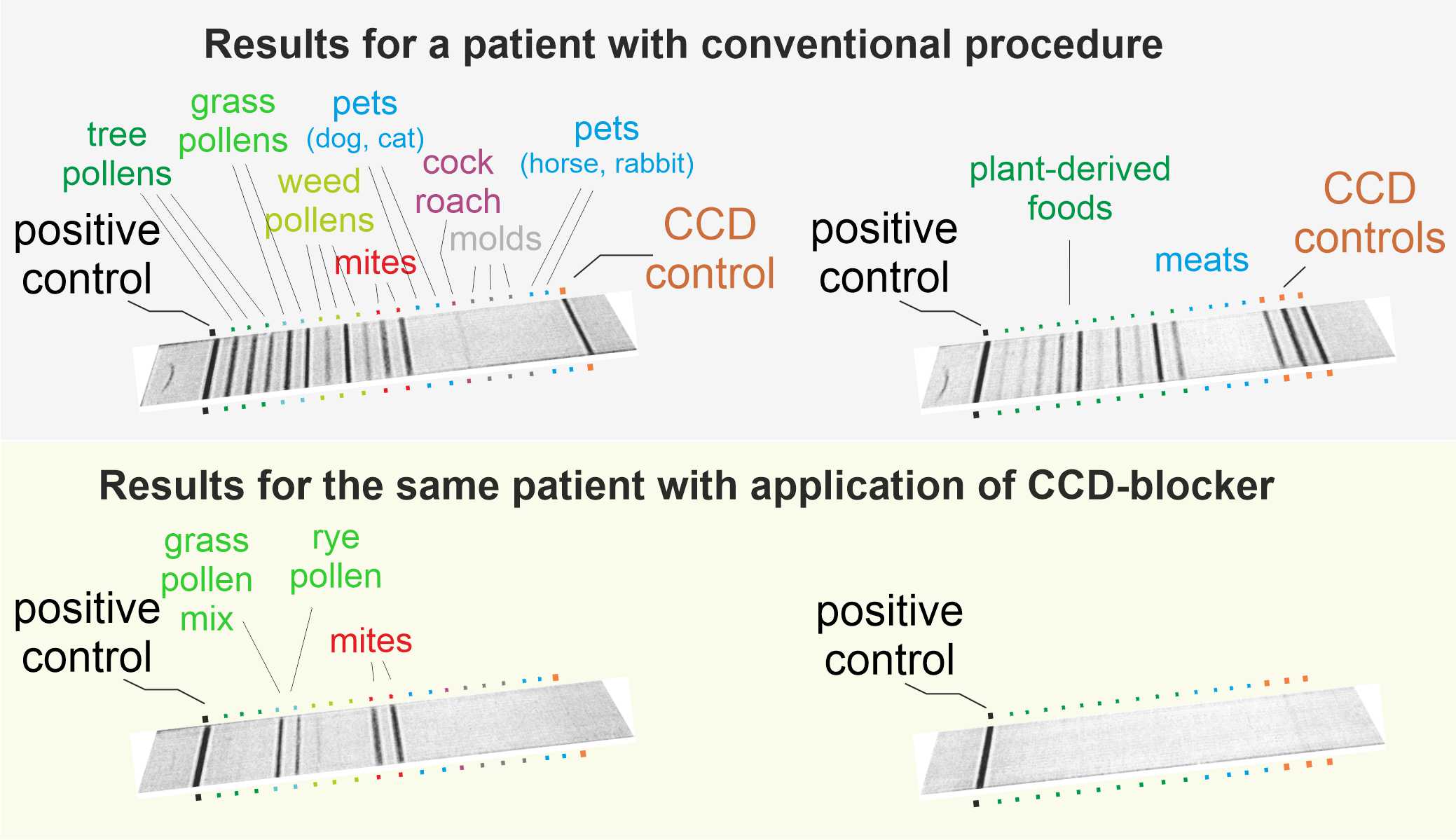 This result was confirmed by the “conventional” single allergen Phadia CAP system, where the diagnostic lab can choose between both allergen extracts or single components. For this patient, the results for birch and grass pollen and for houst dust mite were re-tested with CAP. The results clearly corroborated those obtained by the strip test WITH CCD-inhibition. Most importantly, this result clearly shows that protein-based, “true” diagnostic results are not affected by the CCD-blocker.